To contact the Garden Theatre
please email: richard@gardentheatre.co.uk
or phone: 07917 221639

On 3rd August 2020, the open air Garden Theatre was created at Eagle London in Vauxhall. Opening with the musical Fanny & Stella, it was the first Off West End live production to open since the National Lockdown in March and was the subject of a national news report on C4 News.

Attended by almost every national critic, led by The Observer and The Daily Telegraph,  Fanny & Stella received three 5 star reviews, twelve 4 star reviews and a Break a Legger award. In addition, the Garden Theatre received the first OFFIE ONEOFF Special Award for creating live theatre “against the odds”.

The world premiere of a 6-player version of Stephen Schwarz’s Pippin was the next musical production, leading to more national reviews, and a feature in The Guardian on venues producing theatre against the odds. Pippin received a London Pub Theatre Standing Ovation Award, two Break A Legger awards, and four OFFIE nominations.

A series of late night shows, branded EAGLE Late, was initiated for a less mainstream audience. The EAGLE Late shows are of LGBT+ interest and are more edgy and adult in nature. These follow the main shows, starting after 21:00 hours. The series started with Naked Boys Singing, the first of many productions aimed at a different audience.

In support of recent graduates who, due to COVID, lost the opportunity to showcase their talents, the Garden Theatre co-produced The GRADFEST Showcase. This was extremely successful and gained a second OFFIE ONEOFF Special Award for “creating genuine in-the-flesh opportunities for new graduates to showcase their talents in front of industry professionals and in some case paying public”.

The showcase enabled a number of the performers to get an agent. One of the performers went on to be cast in our next musical Next Thing You Know where she gained an OFFIE Nomination for Supporting Performance.

Announcing the Resident Team of Creatives, in addition to Su Pollard as Patron and Adam Spreadbury-Maher as Associate Director has cemented the new Garden Theatre into a permanent feature on the British theatre scene.

Our pantomime, Frostbite: Who Pinched My Muff gained seven 5 star reviews and five 4 star reviews before having to close prematurely due to Tier 3 restrictions in London.

Praise for The Garden Theatre:

Dominic Cavendish, theatre critic for The Telegraph, tweeted “The creation of the open-air Garden Theatre at the Eagle London in Vauxhall is one of the highlights of the 2020 theatre year”.

Lisa Martland, Editor of Musical Theatre Reviews, tweeted “My first show after months of no theatre, hard not to blub at the joy of live performance once again. Amazingly, a theatre and production born during lockdown. I loved every minute”.

Musical Theatre Musings posted “The shows are always high quality, the staff are so friendly and their can-do attitude when it comes to putting shows on in these unprecedented times is wonderful. I really hope that The Garden Theatre remains when theatres open more widely.”

Mary Beer, critic for London Theatre1 posted: “Lambco productions expertise in taking big shows like Pippin or their own adult Panto, Frostbite, and putting them on as an intimate chamber experience in Vauxhall’s Eagle Pub’s Garden Theatre actually gave me experiences I wanted to repeat – pandemic or not.”

Brian Butler, Editor of G Scene magazine posted “My heroes of 2020 are the organisers of the Eagle London Garden Theatre, Vauxhall, where behind a small pub I watched the wonder of theatre in the queer musical ‘Fanny and Stella’ and the resurrection of an intimate version of the evergreen ‘Pippin’.

The Garden Theatre has been upgraded with two 32Amp electrical feeds, heating, a technical booth, rubber mat flooring, an upgrade to reduce some of the restricted viewing, and a carport canopy for weather proofing.

The Garden Theatre has a full programme lined up for 2021. We will re-open with the pantomime Frostbite, and then continue throughout the year with further full scale musicals.

The EAGLE Late series will continue with at least seven LGBT+ productions that follow the main shows taking the live theatre entertainment well into the evening. 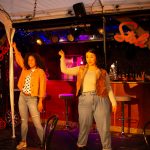 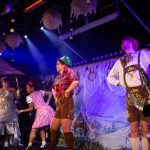 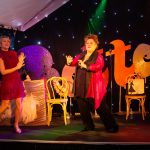 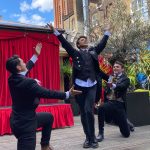 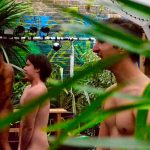 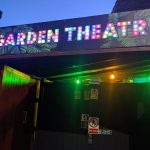 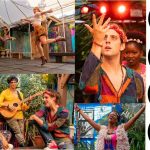 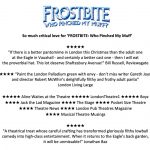 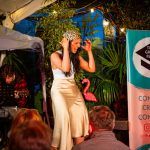 Watch this space for further developments of the Garden Theatre!

and don’t forget to come visit us!