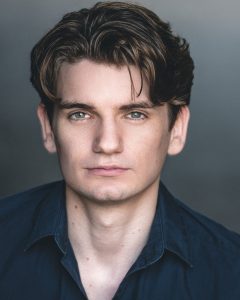 Off-Broadway: Micah in Asking for Trouble and Philly in True Hollywood Story (Ensemble Studio Theatre) as well as appearances in Delphina of the Floods and The Forum (Youngblood)

Film includes: Alex in Pychomanteum, Ross in Subiachi and Alex in It’s in the Trees

Michael trained at The Urdang Academy and London Contemporary Dance School. Upon graduating, he featured in Sadler’s Wells ‘Latin Fever’, then appeared as Jamie in ‘The Last 5 Years’ at the Tabard Theatre. He performed the speaking-role of Puck in Britten’s operatic adaptation of ‘A Midsummer Night’s Dream’ at Teatro dell’Opera, Rome.
Upon his return, he played the male-lead in both Smirnoff’s ‘Apple Bite’ commercial and the independent short film ‘A Mime is a Terrible Thing to Waste’. This was followed by his portrayal of the title role in The Lion and Unicorn’s production of ‘Dorian Gray’.
He most recently undertook the role of Toby in an immersive production of ‘Sweeney Todd’ and filmed ‘Tickety-Boo’, a short film about neurodiversity.
Michael has also worked as a choreographer, most notably in Houston Grand Opera’s ‘A Christmas Carol’ directed by Simon Callow.