Awards and recognition for the Garden Theatre and

“If you want to see the future of acting, head to The Eagle pub in Vauxhall. This wonderful show succeeded in making me forget I was sitting in a rainy Vauxhall pub on a weekday evening. For 90 glorious minutes I was whisked away to the heart of glamorous Manhattan.”

Renowned critic Lyn Gardner has this to say about the Garden Theatre: 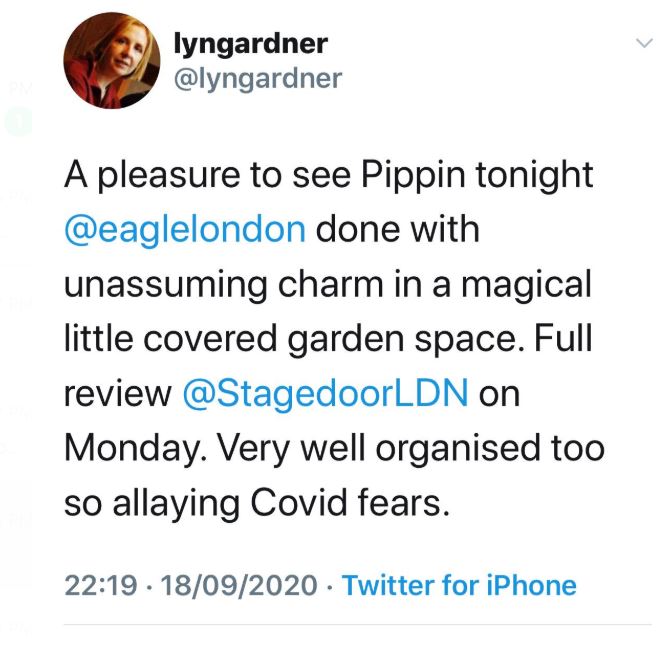 OffWestEnd – the organisation in London which supports, promotes and celebratse independent, alternative and fringe theatre across Greater London – has awarded the Garden Theatre and its productions on numerous occasions

Following Assessor visits to the Garden Theatre, as a direct result of what had been achieved in times of lockdown, the OFFIEs tweeted: “The OFFIEs are pleased to announce new #ONEOFF award to recognise the innovation & resilience of independent, fringe & alternative venues, companies, festivals & others in these difficult times. Tweets follow with details of first winners.”

1st #ONEOFF celebrates the first live “offwestend” prodn since lockdown began in March 2020. Against many odds, LAMBCO @LAMBCO_Prods @Peter_Bull_ opened “Fanny & Stella” at Eagle Garden Theatre @eaglelondon on 3 Aug 2020 – congrats to the producers, venue and all the cast & crew! 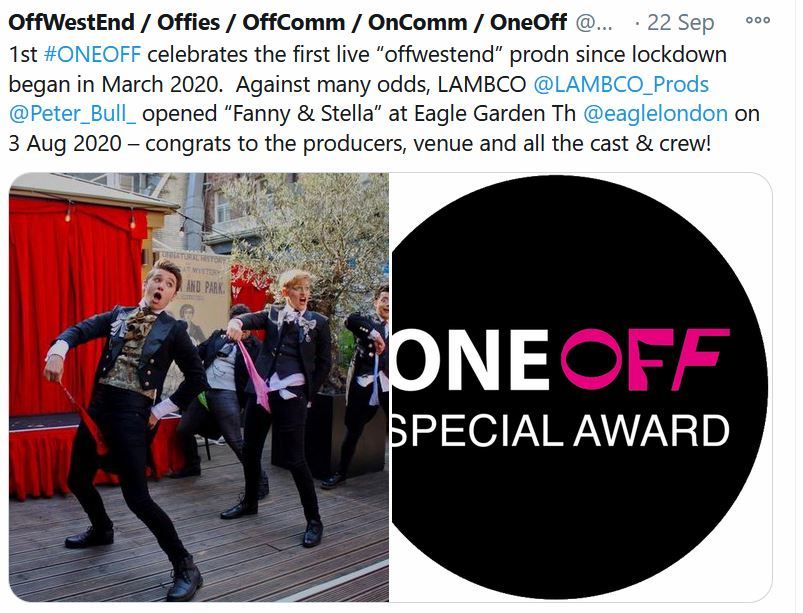 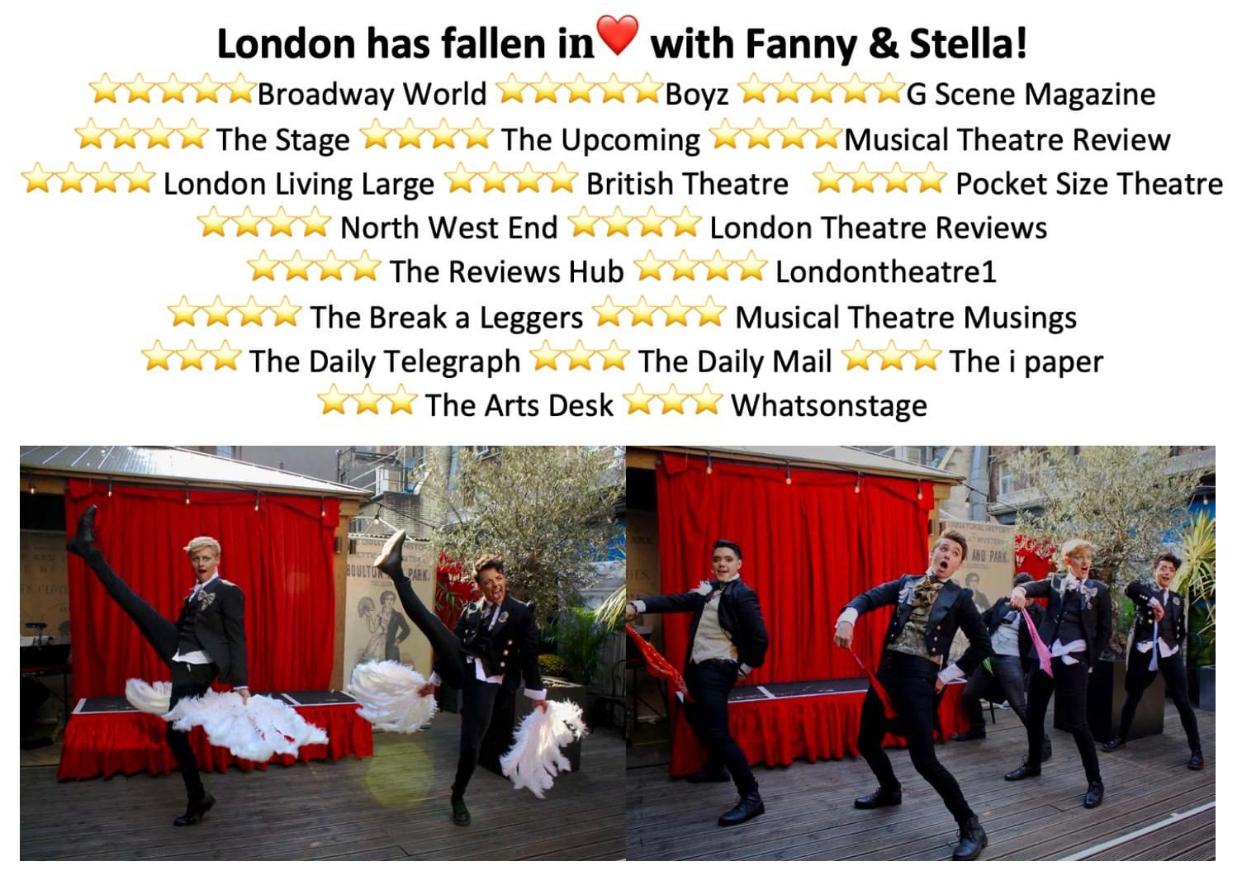 The 2nd musical produced by Peter Bull for LAMBCO Productions at the Garden Theatre. 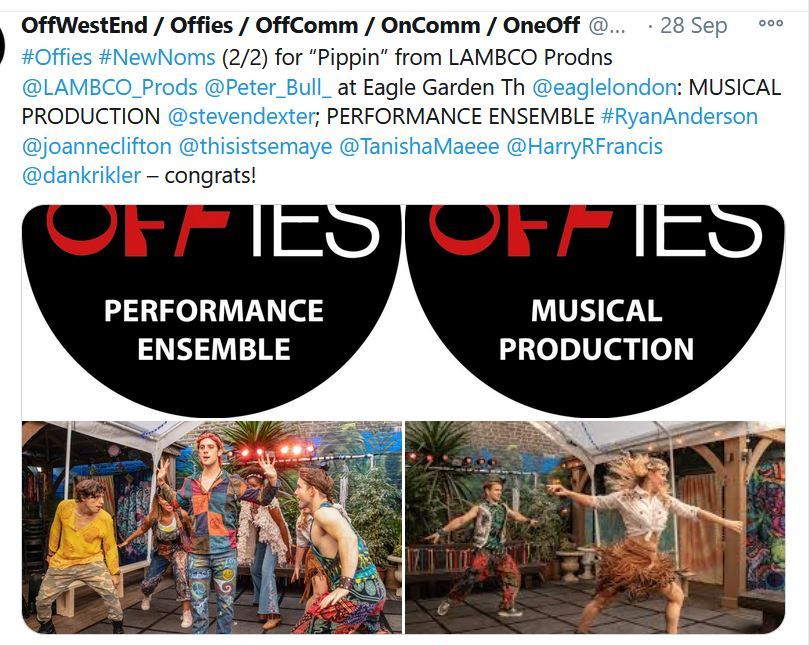 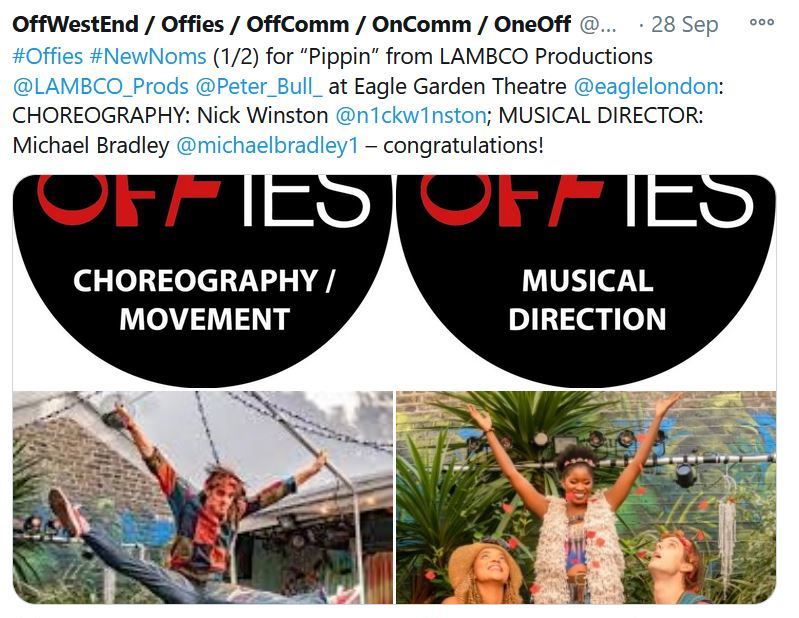 London Pub Theatre awarde the Garden Theatre a Standing Ovation Award
#StandingOvationNom PIPPIN The Garden Theatre @eaglelondon Incredibly talented team of actors who made the small backyard space of The Eagle feel like a West End stage. This was a joyous interpretation of a popular musical when we all desperately need some joy in our lives! 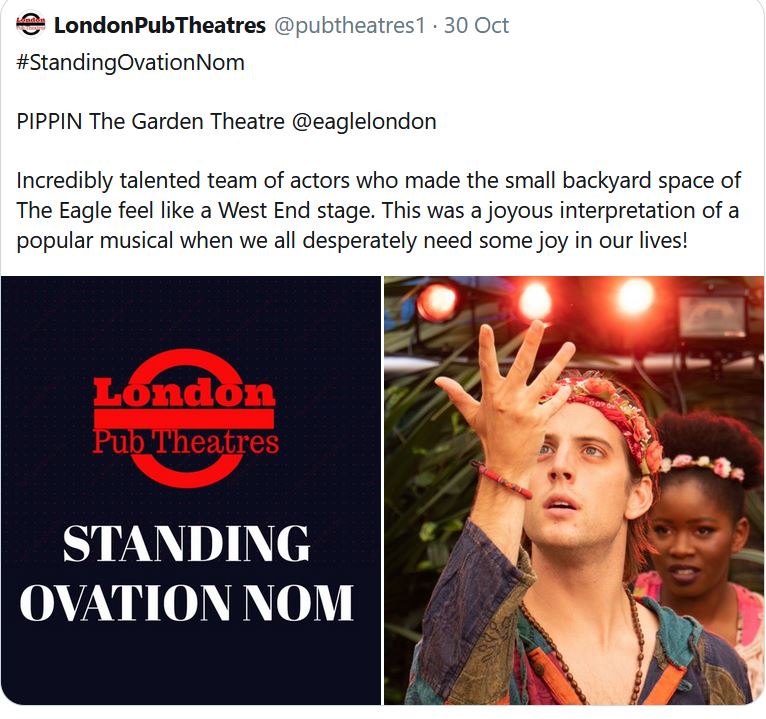 GRADFEST was setup as an organisation to support recent graduates who didn’t get a chance to Showcase their talents. Peter Bull for LAMBCO Productions worked in conjunction with GRADFEST to produce the Gradfest Showcase at the Garden Theatre.

The OFFIEs have awarded an ONE OFFIE SPECIAL AWARD to Gradfest for this outstanding venture. 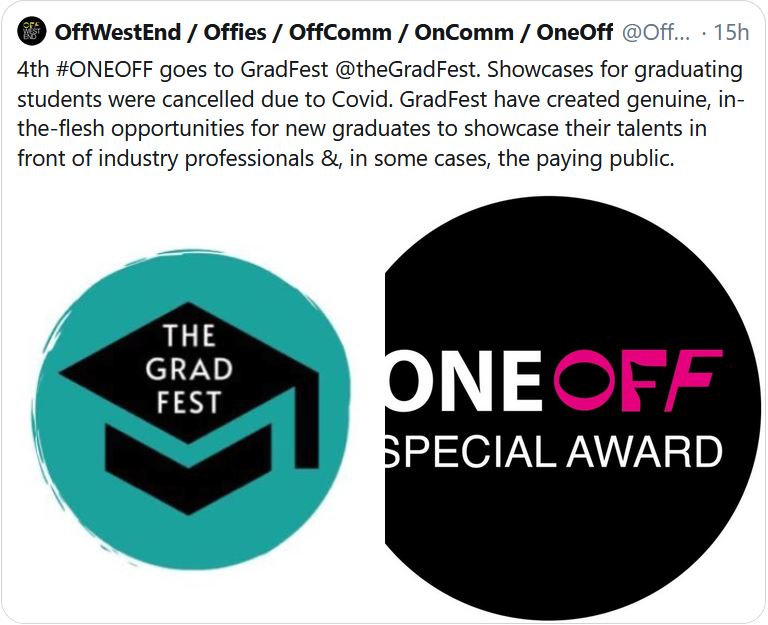 The Third Musical at the Garden Theatre produced by Peter Bull for LAMBCO Productions.

The OFFIEs again nominated: Best Supporting Performance in a Musical. 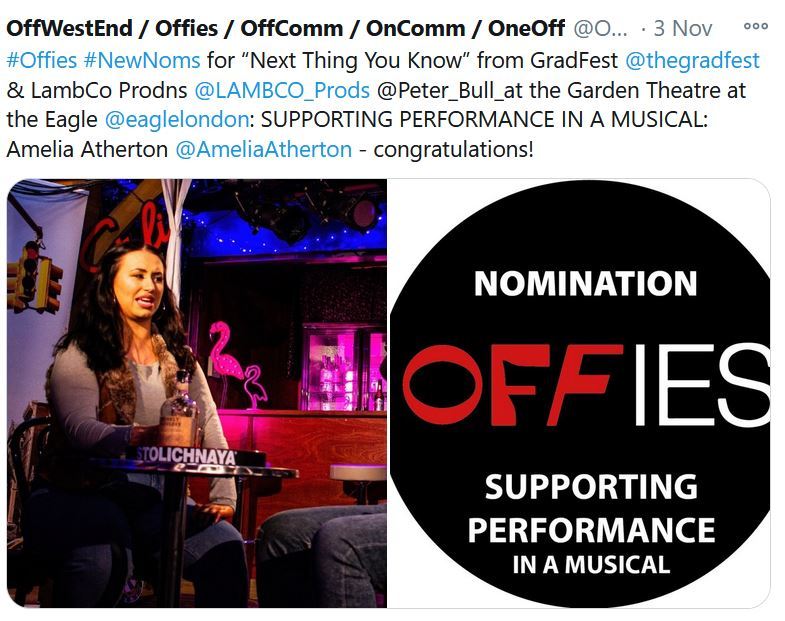 ★★★★ “Terrific talent really takes charming musical, ‘Next Thing You Know’ to a higher level. An entertaining and intelligent little gem of a show. The cast are all straight out of drama school, but based on this offering we predict a stellar career for all of them.”

“A wonderful, entertaining night out, packed with superb lyrical numbers and sung with a quality and confidence you’d expect from more experienced performers – the cast shone.”

‘Next Thing You Know’

“an entertainingly camp, but clever, 70 mins where six brave souls perform this hilarious musical revue that had originally found success in America, running off Broadway for over 12 years…. surprisingly impressive and highly entertaining show…. a celebration of the male form in all it’s shapes, sizes and angles…. impressively tight harmonies…. an amazing tonic that doesn’t take itself too seriously…. there’s nothing quite like the sight of 6 naked (and talented) men to take your mind off the more serious issues of the day, and I hope I will have the chance to recommend this show once again as a way to bring that feel-good factor back into your lives” Jack the Lad Magazine

★★★★★ “Witty, performed with dash and style, and the tonic one needs these dismal days. The athletic choreography devised by their director is stunning, and they can all sing. Camp, but clever, it contains nothing that would cause Aunt Edna to blush, and deserves to run and run” ReviewsGate