BOYS IN THE BUFF

at the Drayton Arms Theatre 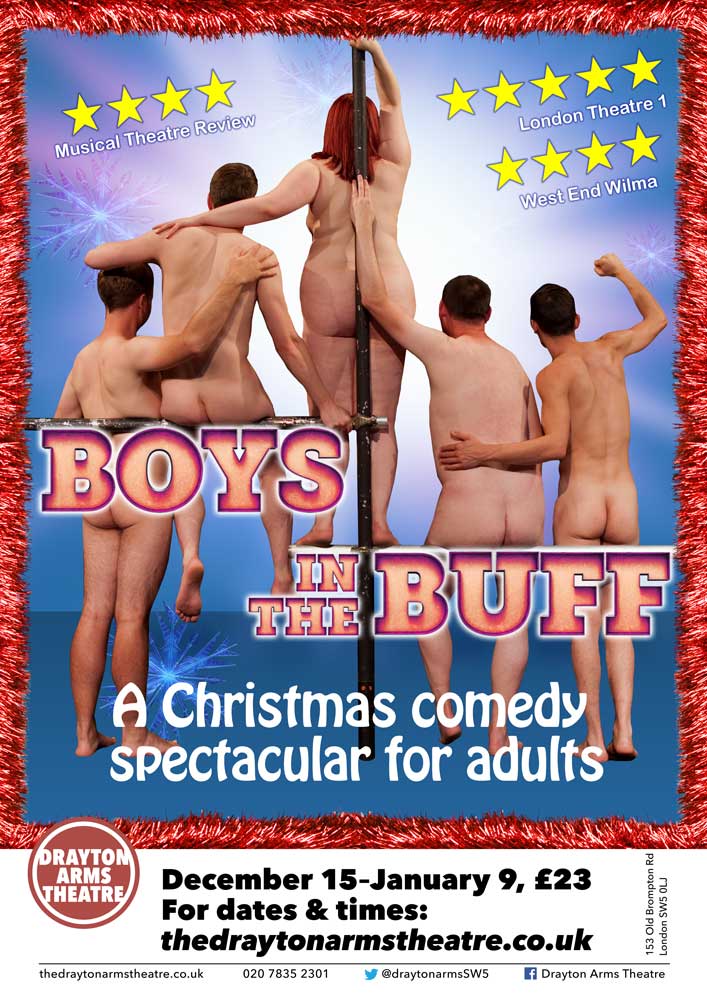 As Diana and her boys sing, dance and tell stories about self-confidence, body image, and society’s unreasonably high expectations on our appearance, they share personal stories and dare each other to reveal more of themselves as the evening progresses.

An alternative to a traditional pantomime, with adult themes, ‘Boys in the Buff’ is the perfect festive show for having some fun at with your friends. You will leave with an enhanced self-worth, a song in your heart and share a few laughs along the way.

Award-winning The Garden Theatre is to present ‘Boys in the Buff’ indoors at Christmas-themed Drayton Arms Theatre, 153 Old Brompton Road, London SW5 0LJ from 15 December 2021 to 9 January 2022. With a *Clothing Optional* performance for everyone – including the audience – on Wednesday 22 December.

Cast to be announced.

‘Boys in the Buff’ was produced at the Stockwell Playhouse in July 2017 to great critical acclaim. It has been produced twice by LAMBCO Productions at the King’s Head Theatre, re-titled as ‘Skin Deep’ for a tour of the UK. It further had a sell-out run at the Gilded Balloon at the Edinburgh Fringe in 2018.

Landor Theatre’s ‘Sondheim’s Follies’, the UK premiere of ‘I Love You Because’ (winner of the TheatreGoers choice award for Best Off West End musical 2007), ‘Put on a Happy Face’ (2009), Alvaro’s Balcony (2008, Assistant Director). ‘Into the Woods’, ‘Curtains’ (2013) AWARD WINNER FOR BEST CHOREOGRAPHY –FRONT ROW DRESS AWARDS, and Shortlist Finalist for the Whatsonstage BEST CHOREOGRAPHY AWARD.

Flynn Sturgeon (Musical Director)
Flynn studied music at Royal Holloway and now enjoys a busy career as a musical director, accompanist and choir director. He is the musical director with the Gay Men’s Dance Company and works extensively with many other choirs and drama schools in London. His recent performance credits include: I Could Use A Drink (Garrick), Roles We’ll Never Play (Apollo/Vaudeville), When I Grow Up (Lyric), Soho Cinders (Charing Cross), The Three Little Pigs (UK Tour) and Frostbite (Garden). Flynn also music directed a concert series aboard the London Eye for the attraction’s 20th birthday, and worked on Songs for a New World at the London Palladium.
sturgeonflynn@gmail.com
07753165541
https://www.flynnsturgeonmusic.co.uk/